An Abortion Book for the Kiddos [Clinton Wilcox]

You may have heard by now that there's a children's book written by Mary Walling Blackburn called Sister Apple, Sister Pig. It's a children's book about abortion. A book about a very adult topic written to children that you wouldn't yet talk about the event that preceded the abortion (the birds and the bees, and all that). You can find the book for free at the link provided, though at free the book is still highly overpriced. 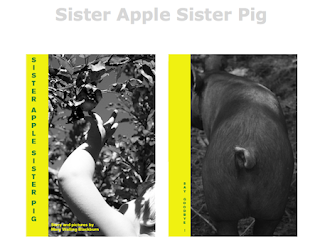 Mary Walling Blackburn is apparently an assistant professor of art at United Methodist University's Meadows School of the Arts. Right off the bat, this woman has no business teaching at a Christian university or any school affiliated with it. Our Lord has some very harsh things to say about those who engage in or support the sacrifice of children. And according to The Blaze, Blackburn wrote this book to "[play] chicken with the anti-choice people."

The book follows Lee, a three year old child who has been told that his mother had an abortion. But it's okay, because if she had kept his sister, she wouldn't be able to spend all that time with Lee, and might not have enough money to feed them.

One of the major problems with this book is that it seems to ascribe full personhood to his sister, talking about how his mom had his sister killed because of these reasons. His parents even convinced him that it's okay because now they can spend all that time with him, and anyway his sister has stuck around now as a ghost (which is certainly against Christian theology). So Blackburn essentially is using a three-year-old child to illustrate why abortion is okay.

Even worse, Lee's father affirms his reasons for his mother's abortion. Here's what Lee says to his father: "I'm not sad that my sister is a ghost! If you kept my sister, you would be tired, and sad, and mad!...Because we would be wild and loud and sometimes we would fight. Mama might be scared that she could not buy enough food for us. Mama might not have enough time to read to me, to paint me with me, to play with me, to talk with me..."

So Lee is scared, most of all, that his mom won't have time for him. He spends the least amount of time on the only reason that might at least make an abortion understandable (which is not the same thing as justifiable), that she worried about having enough money to feed them. And what does Papa say in return? "Lee, you have some good reasons to not have a sister right here, right now."

His dad actually affirms his reasons for his mother's abortion. Of course Lee is okay with it. His parents told him a flat-out lie, that his sister is still hanging around as a ghost (so she's not really gone), and he affirms that his own selfish desires for his mother's time are good reasons for the abortion. Parents are supposed to teach their children how to be moral people. Children need to learn that selfishness isn't right, and that the world doesn't always (or usually) go the way we want it to. That's life. Instead, the father is (perhaps unknowingly) instilling a sense into his son that he can take advantage of people to get what he wants. That's what his mom did with his sister, anyway. And again, these reasons work equally well to kill his sister as an infant.

And of course, there's the fact that while these reasons may work not to have any children, as was mentioned so often in this book, they already had a child. These reasons might be good reasons not to conceive another child, but once a child is already here, you can't just kill the child because he/she is inconvenient.

I tried to Google search for pro-choice blogs that might have gotten wind of this book and given their thoughts on it. I couldn't find any that even mentioned it (perhaps they don't think it important enough to talk about). But if I were pro-choice, I would seriously take issue with the point of view expressed in this book, and the very fact that Blackburn is attempting to talk about this subject with young children.
Posted by Clinton Wilcox at 11:13 AM 24 comments:

I recently wrote an article about Robin Marty, a pro-choice journalist who attended the East Coast Walk for Life and then wrote about her experience. You can read part one here.

My reason for writing these articles is not just to give my thoughts on her experience, but also to emphasize the fact that I think it takes a lot of courage to attend an organization with people who disagree with you on a controversial topic in an attempt to get to know the people on the other side better. If more of us took the time to do that, we'd probably be able to have better conversations more often.

She began by attending a conference of speakers. I'm not really familiar with the Duggars, myself, not being a fan of reality television. I have heard about Shane's Bucket List from the couple with a child with anencephaly, and I'm very glad they had Rick Santorum speak. Santorum is one of the best politicians knowledgeable on the abortion issue. You can see a YouTube video of Santorum debating Barbara Boxer on partial-birth abortion that is very much worth watching.

Next Marty attended a conference of "non-traditional" pro-lifers, a conference where speakers talked about having a place in the pro-life movement for people who don't fit the "white, male, Catholic" stereotype (as for me, a Protestant, I guess two out of three isn't bad). I'm all for this idea. I believe that a house divided amongst itself will not stand. While there are pro-life people I disagree with on other issues, if we want to really see abortion come to an end we need to be united in our cause to end abortion.

That being said, we do need to make sure it goes both ways. I've clashed with pro-life anti-theists on Facebook who were offended by some of my opinions. I wholeheartedly agree with being inclusive, but all of us need to be inclusive. Religious pro-life people shouldn't have to act like atheists to be included by the non-religious.

After that, the march itself began. It's refreshing to see a pro-choice person talk about the actual numbers who participated, instead of the low estimates usually espoused by pro-choice media outlets (there's an inside joke about hundreds of thousands of pro-life ninjas who appear and disappear without being noticed). Marty was able to see first-hand that there really are a huge number of pro-life people who attend these marches, and most of them young people.

Marty did mention passing huge posters of graphic images of abortion, so I'll take a moment to talk about them. I'm not opposed to using graphic images of abortion. I think they can be very helpful to turn an abortion conversation about an esoteric opinion into cold hard reality. It's much more difficult to justify abortion when you have to look at it. I've personally witnessed pro-choice people become pro-life when I showed them the images. But I think abortion images should be used respectfully. I'm not convinced a pro-life march is the best place for it, especially since there are young children who usually attend. I think college campuses are a better place for them, where a free exchange of ideas is reasonably expected.

After passing the abortion photos, the crowd were stopped by a radical, fringe left-wing group called Stop Patriarchy (who are apparently seriously Communistic). The crowd was halted for a while as the police led them away. I guess they succeeded in throwing a small monkey wrench into the march, but I can't see that they really accomplished anything besides being a small nuisance for a little while.

Marty's final event was to attend a sit-in by several pro-life advocates at Representative Renee Ellmers' office over pulling the 20-week abortion ban. However, Ellmers had skipped town, having gotten wind of this protest.

Well, Marty didn't convert at the end, and she doesn't appear open-minded enough to consider that the pro-life position may, in fact, be true. However, it was beneficial to her because it at least showed that behind all the caricatures of pro-life people, there are real people there with real stories. At the very least, the experience may make one pro-choice person more sympathetic to those she opposes.
Posted by Clinton Wilcox at 1:07 PM 6 comments: