Now this is interesting to me. The Slate, a proudly left internet magazine, has an article by Alan E. Kazdin called Spare the Rod on the ineffectiveness of corporal punishment and the need to address the issue here in the United States beyond merely banning it in the public school system.

The article states that there is scientific evidence that corporal punishment is harmful to children. As such, we must ask whether we as a culture should take a principled stand and make it illegal across the board including in the privacy of one’s own home. Mr. Kazdin acknowledges that such a law would be ineffective at actually stopping people from using this form of punishment on their children. However, it would help in educating people and if passed in conjunction with a nationwide effort to inform public opinion (he draws on littering and smoking comparisons and I would add drunk driving and seat belt laws to that) then the law itself would serve to both dramatically reduce the instances of corporal punishment and educate the populace at the same time.

It sounds so logical when someone talks about it in those terms. Laws reduce the specifically addressed action and inform our community morally? Now how does this differ from proposed restrictions on abortion? Why are these arguments so much more compelling when we are talking about spanking your child rather than tearing your unborn children limb from limb and then sucking the parts out of the uterus to be reassembled like a grisly puzzle on the table?

Oh yeah, women have a constitutional right to kill their offspring as long as they have not yet been born. Then we have a responsibility as a society to protect that child even from spanking. Another noticeable difference is that in one case the cool Europeans agree with you. Never underestimate how important that is.
Posted by Jay Watts at 7:40 AM 1 comment: 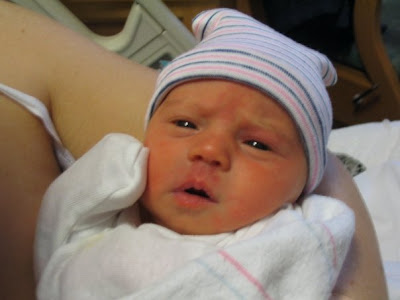 I apologize for disappearing for a while, but I had a banquet to prepare for the CPC at which I work. Oh, and there was one other thing that has eaten into my spare time of late. Her name is Rio Nika and she is a pocket sized beauty. She was born on 9-11-2008.
Posted by Jay Watts at 7:52 AM 4 comments:

Serge,
Yes, the ad is unclear on the face of it. But McCain's position is no mystery: He supports using tax dollars to destroy "leftover" embryos (those embryos released by their parents for destructive research), but opposes cloning them for medical research. I haven't detected from him any substantial change in his views, though maybe I've missed something.

His position is indefensible. Like I've said before, McCain will disappoint us on some levels, this being one of them. Yet given the alternative,I'm not about to jump ship. Even greater evils await us should he lose.

They just called for my gate. I'll try to check more on this when I get home.
Posted by SK at 1:55 PM 1 comment:

OK, I'll admit that I am quite confused about this radio ad:

Hmmm. Palin has stated numerous times that she is against embryonic stem cell research, and McCain seemed to soften his stance during the Rick Warren symposium. I hope that the campaign is intentionally using the term "stem cell research" to advocate all types of SCR that does not involve the killing of human embryos. It seems that the examples that are given are consistent with the recent advances in adult stem cells. Any thoughts?
Posted by Serge (Rich Poupard) at 5:34 PM 2 comments:

Jivin J writes on Biden's crummy thinking on ESCR.
Posted by SK at 10:09 AM No comments:

When Joe Biden isn't smearing Sarah Palin, he's busy peddling nonsense on abortion. "I'm prepared as a matter of faith to accept that life begins at conception. But that is my judgment. For me to impose that judgment on everyone else who is equally and even more devout that I am seems to me is inappropriate in a pluralistic society."

So Biden embraces a "religion" he doesn't think is true in the real world of politics and law? (Greg Koukl says more about that problem here.)

Bear in mind that Joe has no problem imposing the abortion-choice view that a fetus has no rights whatsoever on a pluralistic society and that contra his own claim, the question of when life begins is a scientific one that can't be answered by theology or philosophy.

There's more going on here than meets the eye. As Yuval Levin points out, the real debate is not over when life begins. Biden doesn't have a leg to stand on when it comes to that question. The real fight, culturally, is over the question of human value. Does each and every human being, regardless of size, location, and development have an equal right to life?

Now if you are a pro-lifer, the minute you reply that all humans have value simply because they are human, Biden and those like him are going to accuse you of making a controversial religious claim, one that has no place in the public square given our pluralistic society.

Whenever I hear this, my first question to my critic is: "What do you mean by religion?"

Everywhere and always, I’m told religion involves metaphysics, that is, comprehensive doctrines about ultimate reality that can’t be proved empirically or argued for rationally. You must accept them on faith. I then ask, "What do you mean by "faith?" Most often I hear that faith means believing something in spite of the evidence; it’s what you fall back on when the facts are against you.

After asking his reasons for believing that, I say: "Tell me why you think anything has value and a right to life." The answer inevitably is grounded in metaphysics, some comprehensive doctrine about the nature of human beings and their place in the world which can’t be proved empirically. I then explain that although the pro-life view is implicitly religious, it is no more religious than alternative explanations about human value and human rights. Everyone is asking the same exact question: What makes humans valuable in the first place? Science can’t answer that question because science deals only with things we can measure empirically through the senses. If you want an answer, you’ll have to do metaphysics.

I've dealt with alleged metaphysical neutrality in other posts, but Biden's dismissal of pro-life arguments as "religious" just won’t work. True, the claim that human embryos have value in virtue of the kind of thing they are (rather than some function they perform) is indeed grounded in a worldview that admits a transcendent starting point for human rights and human equality. But saying an embryo of fetus has value is no more religious than saying it doesn't. Both claims involve prior metaphysical worldview commitments.

I simply don't get why anything that smells like religion is so troubling to secularists like Biden. The Declaration of Independence, Abraham Lincoln’s Second Inaugural Address, and Martin Luther King’s Letter from the Birmingham Jail all have their metaphysical roots in the biblical concept of imagio dei (i.e., humans bearing the image of God). If pro-lifers are irrational for grounding basic human rights in the concept of a transcendent creator, these important historical documents—all of which advanced our national understanding of equality—are irrational as well.

Moreover, the claim that comprehensive doctrines are faith based and have no place in the public square is itself a comprehensive (and controversial) doctrine, an article of faith that is implicitly religious. What is "religion?" Tim Keller writes that religion "is a set of beliefs that explain what life is all about, who we are, and the most important things that human beings should spend their time doing." Keller argues that even the most secular pragmatist comes to the table with a master narrative, a comprehensive explanation about the nature of the universe and our place in it. In most cases, the secularist is attempting to answer the exact same questions theists do such as what makes humans special? Where do rights and moral obligations come from? What is the common good? A religion doesn’t have to be organized along denominational lines to count as religious. All that’s needed is a set of comprehensive assumptions about the nature of the world and how we should function in it.

Thus, all moral views spring from assumptions that are implicitly religious and sectarian in nature. They rely on overarching doctrines that cannot be proven scientifically and about which many people disagree. Consider the twin claims that women have a fundamental right to bodily autonomy and self-realization. Those claims, writes, Keller, "are impossible to prove and are ‘conversation stoppers’" just as much as appeals to the Bible. So why is only the pro-life view dismissed as religious while the abortion-choice view—which has its own set of moral oughts grounded in prior worldview commitments—gets a free pass?

In short, the pro-life view is indeed religious, but it's no more religious than the abortion-choice one.

McCain and Palin should make that clear to voters.
Posted by SK at 6:37 AM 1 comment:

The Audacity Of Nope [Bob]

A quick summary of the view I'm about to put forth is this:

When it comes to the abortion issue, Barack Obama is a moral coward.

That ought to be succinct enough. I don't say things like that lightly so let me explain why I'm saying it now. I'll start with Obama's response to Rick Warren at his recent appearance at Saddleback Church in southern California. Here's the exchange:

OBAMA: Well, you know, I think that whether you’re looking at it from a theological perspective or a scientific perspective, answering that question with specificity, you know, is above my pay grade.

I can do no better than my friend Jay at addressing the "pay grade" issue (here) so I won't. But this is nothing but a spineless diversion from the actual topic in question. Obama knows that if a fetus is a person (i.e. life begins at conception) he cannot defend his pro-abortion view. So instead of confronting that moral question, he punts.

Let me just say that his answer to that question was all I needed to come to my "moral coward" assessment. But there is more that I have learned since that has only strengthened my confidence in that assessment.
Read more »
Posted by Av8torbob at 9:09 PM 4 comments: