Using a Tragedy for Your Agenda [Clinton Wilcox]

Early this morning, tragedy struck Orlando, Florida when a man, Omar Mateen, walked into a gay club in the city and opened fire. He killed 50 people and wounded at least 53, and after a three-hour standoff, police burst into the building and killed the gunman. Of course, there is much speculation about his motives. It's not my intention here to guess at what his motivations actually were. While many were quick to sympathize with those killed and urged us to mourn with them, many also took to social media to support their own pet agenda. One such tweet follows: 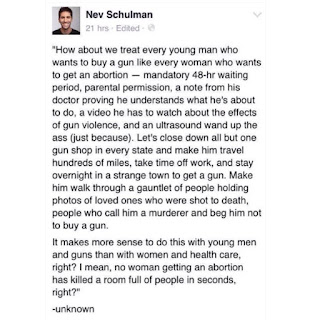 This gentleman took to twitter to compare the need for gun control to the need for abortion regulations. Of course the comparison doesn't make any sense, but it didn't stop him (and many others) from predictably arguing, following a shooting, that we need stricter gun control. Let's take a look at his claims.

There's a very important difference between owning guns and abortion. The right to own and bear arms is a right that is specifically spelled out and guaranteed by our Constitution, ever since its inception. The text of the Second Amendment reads as follows: "A well regulated Militia, being necessary to the security of a free State, the right of the people to keep and bear Arms, shall not be infringed." To infringe means to "Act so as to limit or undermine (something)". To institute these things (mandatory waiting period, doctor's note, etc.) would be clearly infringing upon the right to keep and bear arms. However, the "right" to an abortion is not a right guaranteed by the Constitution. In fact, it was a "right" invented in 1973 by the Supreme Court. Killing an innocent human being is not a natural right, and our Founders knew that.

"It makes more sense to do this with young men and guns than with women and health care, right?"

Here Nev begs the question by assuming that abortion is health care. But if pregnancy is not a disease, then abortion is not healthcare. It makes sense to do this with abortion because, the immorality of the act aside, many women and young girls who abort do so out of panic, fear, and frustration. These limitations are put in place to allow these girls/women to have adequate time to calm down and make sure they're in a more rational frame of mind to make a decision about what they think they want.

"...no woman getting an abortion has killed a room full of people in seconds, right?"

Well, more than 50 million women have killed their children in a manner of minutes in these abortion clinics.

Comparing gun control to abortion is simply a false analogy. If you institute gun control, the only people who win are the criminals, who will still be able to acquire guns. They will have an easier time because law-abiding citizens will be unable to protect themselves. Comparing gun control with abortion regulations is nothing more than exploiting a tragedy for your own agenda.
Posted by Clinton Wilcox at 7:56 PM 3 comments:

Is God Pro-Abortion? A Response to Cenk Uygur of The Young Turks [Aaron Brake]

Receiving your news and information from late night television, comedy shows, or internet political commentary can often leave you misinformed, especially when hosts address topics in which they have no expertise. Such is the case in this video where Cenk Uygur of The Young Turks offers his thoughts on the Bible and abortion and attempts to make the case that God is pro-abortion:

How should Christian pro-life advocates respond? Cenk needs to be corrected on several points.

First, Cenk begins by writing off the scientific evidence that a genetically distinct, living, and whole human being comes into existence at conception. The question of “when life begins” has been settled for decades thanks to the science of embryology. To quote just a few experts in the field,

Human life begins at fertilization, the process during which a male gamete or sperm (spermatozoo developmentn) unites with a female gamete or oocyte (ovum) to form a single cell called a zygote. This highly specialized, totipotent cell marked the beginning of each of us as a unique individual. (and) A zygote is the beginning of a new human being (i.e., an embryo).”[1]

“Although life is a continuous process, fertilization… is a critical landmark because, under ordinary circumstances, a new genetically distinct human organism is formed when the chromosomes of the male and female pronuclei blend in the oocyte.”[2]

“The development of a human being begins with fertilization, a process by which two highly specialized cells, the spermatozoon from the male and the oocyte from the female, unite to give rise to a new organism, the zygote.”[3]

You can read 40 similar quotes from medical experts in this article who reach the same conclusion.

Despite the evidence, Cenk says the view that life begins at conception is based solely on religion. Why? Because this allows him to dismiss the view as “religious” which further justifies his refusal and inability to interact with the evidence. Not only is this wrong, but it is intellectually lazy. Secular pro-life advocates use the same evidence and argumentation in making a case for the pro-life view, and their analysis certainly cannot be labeled “religious.”