I intend to blog through this entire book. 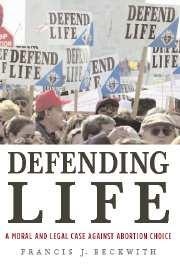 However, my posts are not a substitute for reading it. They are only designed to help readers track the major themes and arguments. My guess is that I’ll make between 10 and 12 posts on the book, though I may do more. Given my Fall speaking schedule, postings will be semi-regular and no doubt I will fail to treat some sections of the text as thoroughly as I should.

This is a book for careful thinkers. Though Frank believes he successfully refutes his critics (and I agree he does), he treats them charitably and takes their arguments seriously. He even thanks them up front (in the acknowledgments section) for helping him refine his own case. Among those thanked are David Boonin, Dean Stretton, Michael Tooley, and even Peter Singer. Classy.

Beckwith’s primary purpose is to provide a thorough defense of the pro-life position and its grounding in the “substance view” of human persons—a view he claims best explains human equality. He writes: “This book is, in a sense, then, not really a book about abortion, but rather, a book about human equality.” Frank contends that the larger metaphysical question—who are we?—should be answered by enlarging our definition of the human family to include the unborn. His secondary purpose is to examine the relationship between abortion and law, politics, and public discourse.

The pro-life argument Frank defends can be outlined as follows:

By “full-fledged member of the human community” (premise #1), Frank means that just like you and I have a natural right to life, so do the unborn. Thus, depriving them of that life requires the same strict justification needed for killing a 10-year old or any other human being. Note that Frank is not arguing we can never take unborn human life, only that it’s prima facie wrong to do so. That last point is a key distinction, one often missed by some abortion-advocates who insist pro-lifers are inconsistent for opposing elective abortion but not opposing the death penalty, the killing of animals, or war. In this case, the abortion-advocate is attacking a straw man: The pro-life position is not that it’s always wrong to take human life. Our view is that it’s always wrong to take human life without justification, and we believe (for good reason) that elective abortion does just that.

The book is divided into three parts. Part 1 deals with moral reasoning, the law, and politics. Part 2 is the core of Frank’s case for the pro-life view, which includes both the scientific and philosophic considerations. Part 3 takes on cloning and embryonic stem-cell research.

The thrust of the text is philosophical and jurisprudential rather than religious. In each case, the arguments presented pass the test of public reason. That’s not because he thinks theology doesn’t count as real knowledge (indeed, he argues elsewhere it does). Rather, he’s cutting-off secular critics who unjustly dismiss pro-life arguments with the wand of "faith"--which they define as non-rational and subjective.

Frank sums up the current controversy this way: “At the end of the day, the abortion debate is about who and what we are and whether we can know it.” Having been well-schooled by Frank (and Greg Koukl), I start my own pro-life presentations by saying that our nation is having a huge argument over two key questions that will impact our kids and grandkids. First, we’re arguing over the question is truth true or is it merely a matter of personal taste, like choosing one’s favorite flavor of ice-cream? Second, we’re arguing over what makes humans valuable in the first place: Are we valuable for what we are intrinsically or only valuable for what we can do instrumentally?

Frank’s book speaks persuasively to both of those questions.

Part 2: Assessing the Case for Abortion Choice and Against Human Inclusiveness

Part 3: Extending and Concluding the Argument

"By a masterful marshalling of the pertinent arguments and a civil engagement with the counter-arguments, Beckwith makes a convincing case for law and social policy based on reason and natural rights rather than the will to power."
Reverend Richard John Neuhaus, Editor-in-Chief, First Things

"Like a superhero fighting on hostile turf with one arm tied behind his back, Francis J. Beckwith confronts every argument ?- popular, legal, and philosophical ?- that comes out against the pro-life position and fends them off one by one with steadfast rationality and exuberant invention. Between punches, drawing on the science of embryology and on philosophical anthropology, he develops a gracious and luminous case for the simple goodness of human life and the basic equality of all members of the human community from the moment of conception. Readers will judge for themselves whether or not he delivers a knock-out, but after working through Defending Life: A Moral and Legal Case against Abortion Choice, no one can honestly hide behind such conceits as that all educated people support abortion, that nothing but blind faith rejects abortion rights, or that we are faced with a tragic choice between intelligence and life."
James R. Stoner, Jr., Louisiana State University

"Using an argument rooted in nondiscrimination and equality of persons, Beckwith deftly combines the analytical tools of philosophy, jurisprudence, and science to construct a brilliant case for governmental protection of the unborn. Critics will have difficulty refuting the logical conclusion that emerges from his basic premises."
Carol Swain, Vanderbilt University

"Francis Beckwith’s Defending Life directly confronts, with careful analysis of specific texts, a wide variety of arguments made by prominent scholars who favor abortion rights, including Judith Thomson, David Boonin, Dean Stretton, Eileen McDonagh, Paul Simmons, and Stuart Rosenbaum. Those who read the book may not agree with Beckwith, but they will have no ground to complain that he has not taken the arguments on the other side seriously, since the book is a sustained analysis and critique of the most important arguments in defense of abortion rights. It is often said that the anti-abortion position is fundamentally religious. Defending Life, however, provides a comprehensive and sophisticated philosophical defense of the position – too often given short shrift in academia – that abortion involves the deliberate, unjustifiable killing of a member of the human community. It is an invaluable contribution to debate on this central social and political issue."
Christopher Wolfe, Marquette University

"As the Supreme Court’s recent decision upholding the ban on partial birth abortion and the controversy over stem cell research make clear, the issues surrounding respect for life will continue at the forefront of American politics in the twenty-first century. Professor Beckwith’s new book makes an important contribution to these debates. Defending Life is, and is likely to remain for a long time, the most thorough and detailed statement of the pro-life position. It is well-written and learned; the author’s command of the relevant literatures, both legal and philosophic, is impressive."
Jean M. Yarbrough, Bowdoin College

Defending Life is the most comprehensive defense of the prolife position on abortion ever published. It is sophisticated, but still accessible to the ordinary citizen. Without high-pitched rhetoric or appeals to religion, the author offers a careful and respectful case for why the prolife view of human life is correct. He responds to the strongest prochoice arguments found in law, science, philosophy, politics, and the media. He explains and critiques Roe v. Wade, and he explains why virtually all the popular prochoice arguments fail. There is simply nothing like this book.

About the Author
Francis J. Beckwith is Associate Professor of Philosophy & Church-State Studies, Baylor University, where he teaches in the departments of philosophy and political science and the J. M. Dawson Institute of Church-State Studies. A 2002-2003 Madison Research Fellow in the Politics Department at Princeton University, he is a graduate of Fordham University (Ph.D., philosophy) and the Washington University School of Law, St. Louis (M.J.S.), where he won the CALI Award for academic excellence in the Reproductive Control Seminar. His more than a dozen books include Is Statecraft Soulcraft? Christianity and Politics (forthcoming); To Everyone an Answer: A Case for the Christian Worldview (2004); Law, Darwinism, and Public Education: The Establishment and the Challenge of Intelligent Design (2003); Do the Right Thing: Readings in Applied Ethics and Social Philosophy, Second Edition (2002); and The New Mormon Challenge: Responding to the Latest Defenses of a Fast-Growing Movement (2002), which was a finalist for the Gold Medallion Award in theology and doctrine. With interests in jurisprudence, politics, philosophy of religion, and public policy, Professor Beckwith has published in a wide variety of academic journals including the Harvard Journal of Law & Public Policy, Journal of Social Philosophy, International Philosophical Quarterly, Hastings Constitutional Law Quarterly, Journal of Medicine & Philosophy, American Journal of Jurisprudence, Journal of Medical Ethics, Public Affairs Quarterly, Notre Dame Journal of Law, Ethics & Public Policy, Social Theory & Practice, Southern Baptist Journal of Theology, Christian Bioethics, Nevada Law Journal, Journal of Law & Religion, and Philosophia Christi.