Does a Thin Uterine Lining Support the "Pill as Baby Killer" Theory? [Serge]

I believe the most frequently cited evidence for a "baby-killing" mechanism for oral contraceptives (OCs) is the thinning of the uterine lining that occurs when a woman is on OCs. First, I do not dispute this fact: when women are on OCs their uterine lining becomes considerably thinner than when they are not. This is the reason that many women report lighter periods when they are on OCs. I will also concede that this evidence appears compelling at first glance: if a thick, receptive uterine lining is necessary for implantation, and we can show that OCs thin the lining, it almost has to effect implantation. This is the predominant reasoning used by those who support the abortifacient theory. 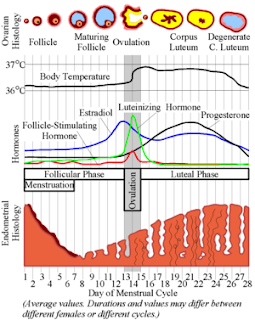 . You can see that the cycle can roughly be divided into the follicular phase and the luteal phase. During the follicular phase, the hormones secreted by the pituitary gland, namely LH and FSH stiffly peak at day 13-15 - which results in ovulation. At the time of ovulation, the uterine lining (seen at the bottom) is quite thin and in fact is unreceptive to implantation . This is a surprise to some, but the truth is that if an embryo attempted to implant at the time a woman ovulates, it would most likely not be successful. Thankfully, implantation naturally occurs days later.

The next phase after ovulation is the luteal phase, in which the uterine lining is prepared to accept an embryo. This phase is controlled by the corpus luteum (thus the name), which arises from the follicle from which the ovum is generated. During the luteal phase, the corpus luteum secretes progesterone (and some estrogen) in order to increase the thickness of the uterine lining in preparation for implantation. If implantation occurs, the CL continues to secrete estrogen and progesterone that support the embryo for 2 more months until the embryonic placenta takes over. The pituitary is able to sense these elevated hormones during pregnancy and will not allow the woman to ovulate during this time (in other words, it will not allow the LH and FSH peak to occur). However, if implantation does not occur, then the thickened uterine lining is lost during menstruation.

I hope you're still with me. The point here is during normal cycles, the luteal phase, which is characterized by the hormones secreted by the corpus luteum is in control of preparing the uterine lining for implantation. The progesterone secreted by the CL during the luteal phase is about 20 times its baseline level, and is far greater than hormone concentrations that are found in formulations of OCs.

What happens on the pill?

What about women on the pill? The primary mechanism of action if OCs is to "trick" the pituitary into believing the woman is pregnant. It does so by elevating the amount of estrogen and progesterone to mimic their levels during pregnancy. As in pregnancy, the LH and FSH peak that would normally occur does not, and the woman does not ovulate, at least in theory.

If ovulation does not occur, then there is no corpus luteum formation, so the uterine lining does not thicken as it normally would. Essentially, women on the pill who do not ovulate have no luteal phase of their cycle. Since their uterine lining does not thicken, you would expect, and it is observed, that their uterine linings are thinner than women who are not on the pill. Their linings would be similar to the thickness at time of ovulation for a woman not on the pill, and as I stated before, this lining is most likely unable to accept an embryo.

What if Ovulation Occurs?

So it seems clear that thickening of the uterine lining in preparation for acceptance of the embryo occurs during the luteal phase of the cycle. A woman on OCs that does not ovulate will not have a luteal phase, thus her uterine lining will be thin. It is also reasonable to believe that this thin uterine lining would not accept an embryo - which is not really a problem because ovulation did not occur. However, what if ovulation does occur? What would happen then?

If so-called "breakthrough" ovulation occurs, then the follicle that released the ovum would turn into a corpus luteum, and the woman would once again have a luteal phase to her cycle. Since the luteal phase is responsible for preparing the uterine lining for implantation, and the hormones secreted by the CL are of far greater magnitude then those found in OCs, it seems reasonable to me that the uterine lining would be thickened and prepared to a similar extent than would a woman who was not on OCs. All of the studies that showed a thinned uterine lining did so an a non-ovulatory cycle. It gives us very little information on what would occur if a woman actually ovulates, which of course is a necessary condition for pregnancy.

I have heard some question this thinking, being skeptical that somehow it would be miraculous that a woman's uterine lining could rebound so quickly from a thin state to one that could accept an embryo. However, what is often forgotten is that this happens every single month for women who are not on OCs! Every month the luteal phase, by using hormones secreted by the CL, turns a thin, "hostile" uterine lining into one that is thick and can support pregnancy. If OCs do create a "hostile environment" for an embryo, then you would have to have some evidence that OCs either negatively influence the CL hormones themselves are that they somehow decrease the effectiveness of the hormonal receptors found in the uterine lining. I have not seem even a possible mechanism for any of these events to occur in the literature, so I remain skeptical regarding this theory.

Whew, thats enough for now. I welcome and covet challenges and corrections regarding this information. However, seeing that this topic is a medical issues, and separate from the ethical issues surrounding contraception, I ask for medical citations and documentation regarding claims that are made.