Hey Pro-lifers: We are Not Winning [Serge]

I know I'll be showing my age here, and as an alum of the University of Michigan this brings back some tough memories, but I was recently reminded of an old football coach from Notre Dame - Lou Holtz.  Holtz was famous for talking up his opponents no matter how bad they were.  If Notre Dame was playing Little Sisters of the Poor of Southwest Montana, Holtz would spend his time saying how tough they were and how ND would have to play a perfect game in order to squeak out a victory.  They would then proceed to trounce them 55-0 and move on to their next "tough" opponent.  Holtz wanted to make sure that his winning team stayed motivated for the next fight regardless of what they've accomplished so far.

This cover from this weeks Time magazine reminds me of this tactic.  Unfortunately, in this scenario - we are not Notre Dame. 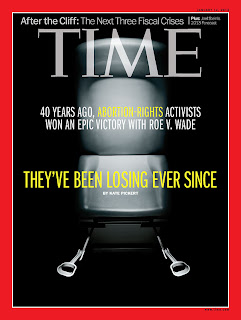 It seems this cover is very much like the "urgent" email alerts I receive from pro abortion choice groups that want more money.  It seems more likely to motivate the other side more than any concession that we are making solid ground

Lets take an quick look at our "winning side":

1.  The most pro-abortion choice president in history who once voted against saving infant who who born alive was reelected not by running from his pro-abortion choice advocacy but by touting it.  Any Supreme Court nominations that occur within the next 4 years will certainly strengthen the pro-RoevWade majority.

2.  We lost 2 senate seats because pro-lifers were unable to adequately articulate their views when asked about abortion in the case of rape.

3.  Our government is now mandating that all employers cover the cost of Ella, a so-called emergency contraceptive that has the same mechanism of action as RU-486.

4.  Although polls show that more people are claiming to be pro-life, their response at the ballet box continues to not support this claim.

What about the positives?  The article touts the fact that abortion providers are down and some areas of the country there is a scarcity of abortion clinics.  This may seem wonderful, but in reality it has very little impact on the numbers.  I'll use myself as an example.  There is no abortion clinic in the city in which I live so women seeking abortion need to drive 30 minutes to procure one.  There is also no abortion clinic in the city where I have another office - and this is the home of a large college.  However, women seeking abortion there have to drive about 40 minutes south to have one.  In other words, while it is true that our opponents goal of having abortion clinics as ubiquitous as Starbucks has not been that effective, abortion is still very easily obtained even in smaller cities.  The fact that an abortion minded woman needs to add an hour to her drive in order to intentionally kill her child does not seem like an awesome victory to me.

So is this simply a written version of "loser talk" that Jay never likes to hear?  Absolutely not.  The worst thing that we can do is to sit back because we believe we are on the verge of winning, when in truth there is very much work to do.  Instead of patting ourselves on the back for the small progress we've made, we need to soberly consider what else we can do.  We need to recommit ourselves to doing the hard work necessary to present the pro-life view in a true, winsome, and effective way.

I recently did the nutty thing of signing up to run my first full marathon in May.  This means that next weekend I plan on getting up at 7am when it is about 15 degrees and do a 2 hr run, followed by a dip of my legs in ice cold water while my wife and kids are eating pancakes.  What would motivate me to do such an insane thing?  Because I know that is what will be necessary to reach my goal months from now.  The worst thing I could do is to believe that I have already trained enough and am adequately prepared.  I am not, and if I'm unwilling to make the sacrifice to be prepared, I won't make it.

Most pro-life posts that I've seen are very self congratulatory and very proud of what we have accomplished so far.  Stop it!  Just get back to doing the hard work needed.
Posted by Serge (Rich Poupard) at 6:55 PM