"If Men Could Get Pregnant, Abortion Would No Longer Be an Issue"

Among all the bad pro-choice sound bites that are thrown around in a culture that seems to thrive on tweets and memes, this has to be by far the worst one I have come across. During a discussion on the abortion issue in a sociology class a few months back, a student in the class made this comment in response to the professor talking about the possibility of Roe v. Wade being overturned in the near future.

Now, aside from being an extremely prejudiced statement (as if simply being male or female can determine the validity of an argument or idea) this assertion offers little in the way of an actual argument against the pro-life case.

The assertion that if I was able to become pregnant, I'd be pro-choice(I'd be female, if that was the case, and my mom and doctor would have quite a bit of explaining to do...), is so laughably bad, it needs an appropriate response: 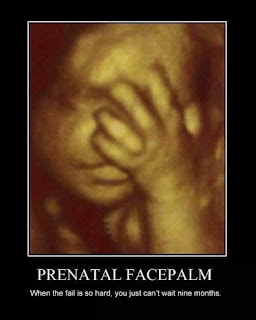 Now that we've taken care of that, let's review the pro-life argument:

1. It is wrong to intentionally kill an innocent human being.

If both premises are true, and the conclusion logically follows from the premises, then the argument is sound. The statement that "If men could get pregnant, abortion would be legal and widely available" does nothing to answer the argument put forward by pro-lifers (including pro-life women). The statement "Abortion is wrong" is either true or false, regardless of the gender of the persons saying it.

However, let's just assume, for the sake of discussion, that men could become pregnant. (Again, setting aside the fact that this would mean that there would no longer be biological males, but just assume it to be the case).

What does this end up meaning? If men could get pregnant, would this mean it is suddenly, magically acceptable to intentionally kill an innocent human being? In turn, would this also mean that abortion does not intentionally kill an innocent human being? How does something as arbitrary as gender, or even skin color, determine the answers to those questions? The science of embryology relies upon empirical research to determine the answer to the question "What is an embryo?", which is completely independent of the gender of the persons doing the research. The embryo either has an intrinsic human nature or it does not. Because of this, abortion is still a moral wrong even if men could become pregnant. Pro-lifers are not arguing that abortion is a moral wrong as long as it is done by women. Instead,  we argue that abortion is wrong because it unjustly ends the life of an innocent human being.

The statement does nothing to answer the arguments pro-lifers make against elective abortion, and instead relies on the very controversial assumption that all efforts to restrict abortion are based in a sort of "patriarchal" society that "oppresses" women. Even if that was the case, intentionally taking the life of an innocent human being would still be wrong. Even if a society is inherently unjust towards women and girls, the answer to such an injustice is to try and right the wrongs being done, not promote a further injustice against more innocent human beings who cannot defend themselves. Such a response is foolish and callous, and ends up resulting in the conclusion that the only way women and girls can respond to being mistreated is to turn around and mistreat other innocent humans who happen to be in their immediate care.

That, in itself, is the anti-woman and patriarchal view.
Posted by Nathan Apodaca at 5:01 PM