Surrender Is Not an Option 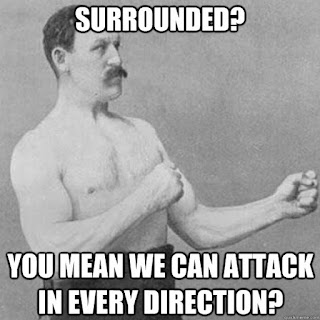 Many pro-lifers have recently begun to check out of the movement. Even worse, a small but growing handful of others have begun to buy the premises of "choice", "personal liberty", and "tolerance", in an effort to make the pro-life view much more appealing to a culture that has made personal autonomy into a religious ideology, and assigned sexual liberty as it's sacrament.

This is not an effective strategy. This amounts to a complete and utter surrender; a giving up of the fight, even when the goal of the pro-life movement for the last 44 years is now close to being recognized. Provided, much of the dismay over the current state of affairs seems to be resulting from the seeming inability of the US Congress to pass a bill to cut federal funding to Planned Parenthood(which doesn't automatically mean that women will begin getting pregnant on an minute by minute basis. There is nothing stopping scores of American Leftists from donating money to keep PP able to provide free birth control). There is also frustration over the apparent stagnation of the abortion debate in the United States, as many people have simply started to ignore the issue.

Even in the midst of ongoing political and cultural frustration, there is still much that needs to be done by the pro-life advocates engaged in various aspects of the culture, and the fight to create a cultural ideal the respects the lives of all innocent human beings is still being waged. To illustrate the urgency, one needs to look no further than the recent war movie, Dunkirk, and the story behind it.

The movie is an account of the disastrous defeat suffered by the Allied forces during World War II, and the subsequent withdrawal of British forces back across the English channel from France. The story of the Dunkirk evacuation would have ended with the UK losing it's primary fighting force to an overwhelming defeat by the Axis powers. Instead, the disaster turned into an example of what courage and perseverance looks like.

Hundreds of civilian British watercraft left their moorings in the English harbors and sailed quickly across the channel to rescue the tens of thousands of British and French troops stranded on the beaches of France before they could be annihilated by the coming onslaught of Nazi troops. Braving machine gun fire, torpedoes, and German dive bombers, the people of the UK simply stepped up to do the right thing. Risking life and limb, they knew the cost of simply sitting by and assuming that "someone else" would step up to the challenge. Thanks to their efforts, what would have been utter defeat turned into a fighting chance for the British.

Re-focusing on the current challenges that confront defenders of innocent human life across the political and religious spectrum(and the Christian church in particular as of late), the example of the heroes of the past should be considered. If someone can risk life and limb to "step-up" and simply do the right thing, how much more is it necessary for those of us who have the ability to get involved to do so?

With the very meaning of what it means to be human, what it means to have value, the meaning and intrinsic purpose of sexuality, and the very definition of justice are now up for grabs, the time is now to get involved. To reach out to those wounded and hurting, and to love them and respectfully share the truth with them about these key issues. To do otherwise would be disastrous.

Surrender is not an option.
Posted by Nathan Apodaca at 6:48 PM