How to Be An (In)Consistent Moral Relativist

The fall 2017 semester is now in full-swing at colleges nationwide! Among the many activities students are participating in, from starting new classes, "crashing" other classes, moving into dorms, getting to know one another, and attending fall semester orientations, the ideology of moral relativism(the idea that all moral rules and standards are to be viewed subjectively, relative to individual persons and cultures) is being promoted wholesale. From class syllabi to course materials, moral relativism is the primary moral system in many colleges, even if students and faculty don't realize it.

There are several major problems with a worldview that leaves moral and ethical rules to be decided by an individual student or cultural group.

Many colleges and universities have changed from institutions promoting the search for truth into camps for training so-called "social justice warriors". Indeed, my own local university, CSU San Marcos, openly promotes social justice oriented events every year, promoting "social justice" within the local community. For an example, the textbook from one of my courses, A New History of Asian America, unintentionally highlights this. In the first chapter of the book, the authors lay out an overview of interactions between the United States and various Asian countries and cultures throughout history, and attempts to argue that the values of the West were "imposed" on those within these cultures, instead of allowing those cultures to promote and thrive according to their own views of the world and cultural values. Worldviews like Christianity, capitalism, and the English language are all scorned as being "forced" upon those living in Asia at the time.

There is a problem, however. If cultural values(including moral rules and standards) are all determined by the individuals and cultures in distinct times and places, by what standard then are we supposed to condemn these acts of cultural imperialism? The American missionaries and businessmen sincerely thought that they were acting in the most morally superior way, such as promoting Christianity and the economic values of the United States and Europe. If cultural values are what determines morality, then there is no standard by which to condemn even the most heinous acts of imperialism throughout history. Doing so would, in turn, simply be imposing one subjective cultural standard(ours) on another culture(theirs), with their own distinct, subjective standard. And there is no standard by which to determine that this is even wrong to begin with.

Even within our modern day culture, this view(subjective moral rules) would make any effort towards a more just and equal society meaningless. As Greg Koukl and Francis Beckwith write in their book Relativism: Feet Firmly Planted in Mid-Air:

"What sense can be made of the judgement 'Apartheid is wrong' spoken by a relativist? What justification is there to intervene? Certainly not human rights, for there are no objective rights in relativism because there are no rights or wrongs of any kind...It would be inconsistent for the same car to sport the bumper stickers 'Pro-Choice' and 'End Apartheid'. Relativism is the ultimate pro-choice position, because it legitimizes every personal choice-even the choice to be racist."

2. There is no absolute "right" to anything if moral rules are subjective

During pro-life outreach last year on campus, a very adamant feminist student(who was loudly protesting our pro-life display, the Genocide Awareness Project) made the assertion that abortion was a right that should not be interfered with, because the Supreme Court had already recognized it as such. Very politely, I asked why it would be wrong for the same Court to turn around and take away that "right". She was unable to answer.

This raises an important question: Are there "rights" that civil government should recognize as objective? Or are rights only created by the government? If the former, then relativism is false. If the latter, then a moral relativist is caught in the ironic position of having to explain what is wrong with the government taking away abortion, same sex marriage, and re-instituting slavery. If the relativist thinks abortion and same sex marriage are things that all adults have the right to, then he is abandoning his own worldview of relativism in favor of objective moral rules. If not, he has no business complaining.

3. Students abandon relativism outside the classroom

This occurred to me the other day while looking for a parking space on campus. Virtually every parking spot was taken, and cars were circling the lot looking like hungry sharks. Whenever a spot opened up, drivers would rush to fill that spot.

Keeping in mind the philosophy that is embraced by almost the entire campus community, I almost decided to see what would happen if I cut off another student and took the empty parking space in front of us. I am sure they wouldn't be happy, and would call me all sorts of names that should not be repeated on a Christian apologetics blog.

Why though? What's unfair about stealing a spot from another student and thus making them late for class when "fairness" is a cultural concept? Suppose I grew up in a culture where you take the opportunities before you by being assertive. Is the cultural relativist going to do the horrific, blasphemous, triggering sin of telling me I was wrong to take their spot from them? Are they going to impose their cultural values on me? Drive on any freeway in southern California and you will see that no one is a true moral relativist.

Even the course syllabi in the philosophy classes promoting relativism will turn around and refute moral relativism on the first day by listing class policies: 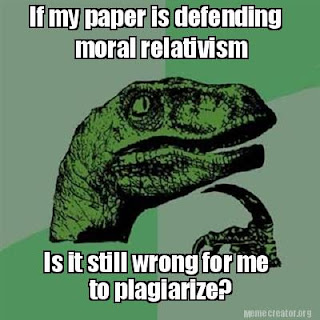 Nothing more needs to be said about that.

An ethical worldview that leaves it's moral standards open to cultural or individual interpretations is impossible to live by. This seems to have escaped the vast number of social justice oriented professors, however, who make their livings by bashing Western norms and views on objective morality, while at the same time forgetting that this is only possible if there are objective moral truths that we are capable of knowing, that exist independent of our immediate acknowledgement of them(the so-called "First Things" that Hadley Arkes has called them)

Until these "First things" are remembered and recognized, students and professors within society will continue to suffer under the dictatorship of being inconsistent moral relativists.

Posted by Nathan Apodaca at 7:47 PM