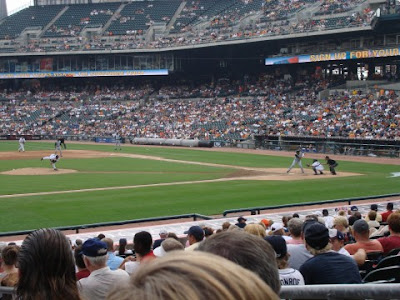 Yesterday, I had the opportunity to attend a Detroit Tiger's game with my soon to be 7 year old son and his grandfather. Comerica park is about a 2 hour drive from our home, and I expected to drive most of the way listening to my IPod as my son quietly took in some Disney movie in the backseat (the trip must be greater than an hour for us to play a movie). I must admit, I was looking forward to some time with nothing but what I wanted to listen to.

Ten minutes into the trip, my son asked for me to put a movie in for him. We quickly realized that in our rush to get out of the house, we forgot to bring a DVD. My son simply said, "Oh well Dad, I guess we are going to have to talk for the whole time." Two hours conversing with a seven year old.

We talked about what he likes and doesn't like about being home schooled. A slowdown at a construction site turned into a discussion about what each of those trucks do, and how his Dad sometimes feels he could trade in his surgical career just to run that large backhoe. We talked about the time my Dad took me to Tiger Stadium when I was young and how we sat through a rain out and punched All Star ballots for hours. I challenged him with math problems, including how much larger Comerica Park is than Dow Diamond, where we frequently watch minor league baseball. When it began to rain for earnest, we both prayed that the game would be played, but acknowledged that there were things far more important, including the time we were sharing.

The game did get played, and we had good seats (see picture). The Tigers stunk up the place, but that really didn't matter much. The highlight of the whole trip for me was not watching the game or even riding the baseball ferris wheel. The highlight was the trip down.

I'm going to be forgetting the DVD and neglecting to turn on the radio more often.
Posted by Serge (Rich Poupard) at 5:05 AM