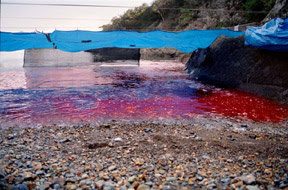 Okay I am being a little deceptive here. It is not graphic videos of unborn children that have been aborted. It is the slaughter of dolphins/pilot whales in Taiji, Japan. According to the Breitbart TV report, as many as 23,000 of the creatures are killed every year. The report says that the Japanese believe that the dolphins should be treated just like any other fish, which immediately makes me hope that this is a translation problem and not that the Japanese think that dolphins and whales are fish. That nit pick aside, in the video the reporter says that, “this is what the Japanese fisherman do not want you to see.” They then show dolphins being slaughtered. (Also see article here)

Why do they think seeing the graphic images will move us in a way that reading or hearing about the killing otherwise would not? Why would they use the graphic images of a cove filled with blood and baby dolphins being piled up with other dead and dying animals? Isn’t this emotionally manipulative? Of course it is! And that is okay.

He was defending the revival service as an emotional appeal. Instead of saying that it was not so, he embraced it. He said that the world used emotion every day to drive a wedge between Christ and his people, why shouldn’t the church use it to fight back and save lives. He argued that emotion was perfectly legitimate within the greater fight to save lives. He was not defending blind, unchecked, irrational emotion. He was defending the idea that preaching the truth of Christ with passion and looking to appeal to the emotions of those who are lost or back slidden was not only permissable but essential. We are rational and emotional beings.

Graphic images that augment rational argument and other emotional appeals complete the pro-life message. They can not become the sole method of communicating, but when used in a constructive context they help appeal to the entire being. It is fair when trying to save dolphins and it is fair when trying to save the unborn. The world uses all sorts of emotionally manipulative methods to steer people to the pro-choice position. It will take a healthy dose of our own emotion infused with a sound rational core of argument to win the whole person to our side.

Anecdotally, I work in a pro-life ministry and BLOG for LTI. I am immersed in the pro-life cause most of the hours of my days. I was recently reading a brochure here at CPS and I saw a graphic image of a trash can filled with unborn children that had been aborted around the 20th week.

It was shocking. It also reminded me what my life is about and why. I needed the emotional appeal, and the imagery worked. I just came off of reading Defending Life by Frank Beckwith and rereading Hadley Arkes Natural Rights and the Right to Choose. I am currently reading Leon Kass’s Life, Liberty, and the Defense of Dignity: The Challenge for Bioethics. The intellect was being fed just fine, but it is not enough. The pictures injected the necessary cooperative feeling to go with the intellectual certainty and outrage.

Do not apologize for appealing to emotion. As long as it is centered in a well-rounded message and argument, the use of emotional appeal is entirely legitimate. We are fighting an emotional battle for whole human beings. To abandon the emotional appeal is to leave a powerful tool sitting in the shed not because it is ineffective but because some find its use distasteful.

HT: The Drudge Report
Posted by Jay Watts at 5:57 PM