Response to Richard Rowe's "Why Pro-Choice is Right" Article, Part I [Clinton Wilcox]

This may come as a shock to some people, but no one is entitled to an opinion. The only opinion you have any right to is a well-informed opinion. If you can't reproduce your opposition's arguments in a way they would agree with and approve, you have no right to try to respond to their arguments. Now Ranker is not exactly a site one should go to if you want to find good arguments for controversial positions. This is another article that was shared with me, this time from Ranker, ironically entitled "Every Compelling Argument for Why Pro-Choice is Right" (ironic, because missing are the only good arguments for the abortion-choice position, bodily rights and personhood arguments). Richard Rowe has give us thirteen arguments for his position. I'll look at the first four in this part. I'll split this up into three parts and look at the other arguments in future installments. Unfortunately many people believe that because they can post up a blog article that gives them the right to write on any particular issue. However, the author of this article, Richard Rowe, has not earned the right to speak to the abortion issue. He doesn't even know the best arguments for his own position, and he clearly does not understand the pro-life argument.

Rowe begins his article by stating that abortion is a practice that dates back to early times, which is true. However, he is gravely mistaken when he says that the Bible takes a strong stance in favor of abortion. The Bible is a pro-life book from start to finish. God takes a pretty firm stance against taking innocent blood. Plus, ancient Jewish and Christian texts have said, in no uncertain terms, that abortion is immoral. The Didache, in fact, calls abortion murder and says it, among other sins, is "the way to death." Rowe takes one passage, Numbers 5:21-28, and asserts that the Bible is in favor of abortion.

I've responded to this passage elsewhere, but two things need to be said about it. First, even if this does have an abortion in mind, it doesn't follow that because God commanded abortion, we are, therefore, justified in having abortions and performing abortions in lieu of a divine command to do and have them. Second, an abortion is not in mind here. This was a curse proclaimed on adulterous women. We have to remember that children were a blessing to women, so this curse would shrivel up the womb of a woman who committed an adultery. This would only result in abortion if she was actually pregnant, but it would prevent her from ever getting pregnant again. An abortion is not in mind here. This was a test to see who committed adultery. A woman who didn't commit adultery would gladly drink the potion to exonerate herself. A woman who didn't would not because of the effects of the curse.

Now let's look at his arguments in turn and respond to them.

Rowe asserts that there are three great flaws in using the Bible to justify a stance against abortion. Herein lies the second issue with his lack of credibility on this issue (the first being his lack of the good arguments for his own position) -- it's true that most pro-life people are Christians and are ready to make a Biblical defense of the pro-life position. However, most pro-life people make a non-religious case from human rights and the biological humanity of the child. There are also non-religious pro-life organizations, such as Secular Pro-Life. So how would Rowe respond to them?

The third issue that Rowe doesn't understand the Bible. He is wrong when he says Biblical arguments for the pro-life position boil down to cherry picking. In fact, from start to finish the Bible has pro-life themes in it (see my linked article above). It is the abortion-choice advocate, not the pro-life advocate, who cherry picks Bible passages to justify their own position on the matter. The abortion-choice advocate has to deal with some bothersome verses as "you shall not murder" (Ex. 20:13, Deuteronomy 5:17), that child sacrifice has "never even entered [God's] mind" (Jeremiah 19:5), and the fact that third trimester John the Baptist "leaped in the womb" when Mary, pregnant with first trimester Jesus, approached his mother, Elizabeth (Luke 1:41). They also have to deal with certain troublesome passages as the numerous ones in the book of Psalms in which the psalmist assumes a continuity of identity with himself from the womb (e.g. "in sin my mother conceived me", Psalm 51:5). We don't cherry pick verses because the Bible is simply a pro-life book through and through.

This argument is just rehashing Numbers 5 from Rowe's introduction. However, Rowe is mistaken when he says that she would then be stoned to death in the street for her crimes. The passage does not say that. In fact, the passage actually says "...and the woman will become a curse among her people." Still not very pleasant, but not the same thing as being stoned. Since Rowe is evidently familiar with this passage, the only conclusion we can reasonably draw is that he is purposely trying to mislead people with his article.

Since I've already responded to this argument, we'll move on.

However, even in responding to a pro-life argument, Rowe misses the mark entirely and shows that he doesn't understand that which he is trying to criticize. To begin, Jeremiah 1:5 is not a verse I typically use in a Biblical defense of the pro-life position. I think if we are to take the words literally that "before I formed you in the womb I knew you," this would lend itself to the Mormon position that we exist spiritually before we are conceived in the womb. This is not speaking of fetal personhood but of God's foreknowledge. But let's look at Rowe's subpoints.

A) Misattribution: Rowe says that Jesus never said this. It was Yahweh speaking to Jeremiah. Rowe is correct on this point, but incorrect on another. I have never heard a pro-life Christian say that Jesus says this. Jeremiah is an Old Testament book, so of course it wasn't Jesus speaking. Rowe can't even get this basic point correct, and doesn't link to any pro-life person claiming these are the words of Jesus. 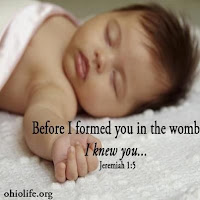 B) Misquote: Rowe claims that pro-life people misquote this verse as saying "in the womb I knew you," rather than what it actually says, "before I formed you in the womb, I knew you." This is, of course, correct in how the verse reads. However, again, I have never heard a pro-life person claim that God said "in the womb I knew you," at least not if they were quoting Jeremiah 1:5. Take the meme to the right of this paragraph, for example. This is by Ohio Right to Life, and it is certainly not a misquote. Again, Rowe doesn't link us to any pro-life Christian who misquotes this verse.

Finally, Rowe states that this passage is God "bragging about his omniscience and power" "as usual", again indicating that Rowe is clueless about what is actually going on here. God is not bragging; he was explaining to Jeremiah since he had selected Jeremiah to be a prophet.

Again, the only reasonable conclusion I can draw is that Rowe is simply lying about pro-life people for the sake of his article.

More lies from Richard Rowe. First, he provides absolutely no evidence to support his contentions here about a "baby's worth" in Jewish law. Second, this isn't a Biblical argument at all. The Talmud is a book of Jewish civil and ceremonial law. It is not considered part of the Hebrew Scriptures. Considering this basic error, Rowe should not be taken seriously on his understanding of this issue.

Now, even if the Jews disagreed with Christians regarding abortion, this is not cause for alarm. The Jews also disagree with Christians about other things, such as Jesus being the Messiah. So while this kind of argument might work with Jews, it would not work with Christians. I am not Jewish, I am Christian, so looking at the Talmud would not convince me to take a different interpretation of Scripture. However, it is difficult to see how Rowe's interpretation of the Talmud could be correct regarding how the Talmud sees the fetus and infant, considering that abortion was absolutely forbidden after the point of viability, and if killed at even one day old outside the womb, the transgressor was guilty of murder (Nid. 5:3).

This really is a non-argument. It's true, of course, that most abortion-choice people do not consider themselves pro-abortion because they consider abortion a "necessary evil". However, Rowe is incorrect that there isn't an "abortion fan club out there". There are those in the abortion-choice community who really are pro-abortion and think that abortion-choice people should start adopting pro-abortion rhetoric, such as this person, who understands that the term "pro-choice" is inherently misleading, or this person who believes they should be painting abortion in a positive light to have an impact on the culture and "remove the stigma".

So while most abortion-choice people would not consider themselves pro-abortion, there is a subset of the abortion-choice population that embraces the term instead of shying away from it. They may be in the minority, but you should not pretend they don't exist.

At any rate, this is a debate over semantics which has nothing to do with whether or not abortion-choice is the correct position on the matter. So this is simply a red herring.

It is clear that Rowe has no understanding of the intellectual climate of the abortion issue, or of the positions of those he wants to criticize. He also has not done an adequate job of supporting his own position, with three arguments that don't even address the topic at hand. This is only the tip of the iceberg. I'll look at his next four arguments in the next part of this series.
Posted by Clinton Wilcox at 11:40 AM