I have to admit, I have read this article by Mike Adams at TownHall.com a couple of times and I still do not get his point. Mr. Adams regularly polls his students at University of North Carolina – Wilmington on what group they would most like to ban from the college campus. This year it appears pro-lifers have made that list. The reason is that groups like the Genocide Awareness Project and Justice for All bring large graphic visual displays of aborted human beings and this creates anxiety and resentment in the students, especially the students who have had abortions in the past.

I can appreciate that Mr. Adams does not personally feel as if the pictures are a good tactic, but his alternative tactic is so Utopian that it calls into question why he would bother writing it at all. Here is an excerpt.

“First, I think we can start by replacing pictures of the dead, dismembered fetus with pictures of some live ones. Instead of reminding people of what a horrible thing they did in the past when they had an abortion we can focus on what a beautiful thing the fetus is and how much more beautiful it can be in the future.

This is odd because I thought crisis pregnancy centers all over the United States were already trying to do this. I need to check with the counselors tomorrow here at the CPC where I work to verify this, but I am confident that these things come up with the 400 women a month that our CPC counsels.

But the truly bizarre part is later in the article as he writes the following:

“We take these children from very early on and love them like there’s no tomorrow. Then, after we have them firmly convinced that they are loved - because they are unique and they bring great joy to their parents who simply could not imagine life without them -we are ready to let them out into the world. Then, when tomorrow does come and the children encounter those who do not love them like their parents – those who want children to drink and do drugs and do other things children should not do – then they will not listen because the voices telling them to do bad things are coming from those who do not love them like their parents. Then it all becomes so obvious why Jesus had to speak of Satan and hell but spent even more time talking about unconditional love.

Maybe the key to not hurting those who have had abortions is stopping to remember that they are someone else’s children, too. And maybe if we would share with them the Good News of Jesus rather than the bad news of genocide, they would be convinced that we are the type of people who should keep and care for their babies. Then, I suppose everyone would be happy and pro-lifers and pro-choicers could stop trying to show each other who is morally superior to whom and why. And I guess the babies would be happy, too.”

I firmly believe the love of Christ is central to winning the battle of abortion, but I fail to see how advising us all to love children so much that they never get abortions constitutes a sound tactic. He fails to critically address the displays beyond saying that they upset people, which I am pretty certain is the point of the exhibits. Just love the kids and abortion will go away. Well we will get right on that, Mike. Let say that we also try to stop the 1.3 million legalized surgical abortions a year while we are raising the next generation of hyper loved kids just for kicks. 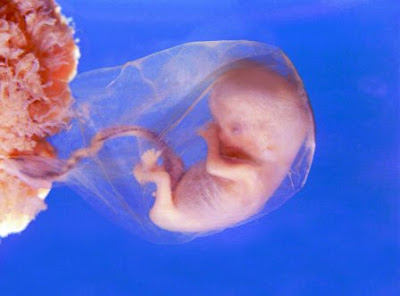 But for a moment lets act like this article wasn’t weird and had a point. Lets say he is arguing that we will make more tactical advances at winning hearts and minds by convincing and inspiring people to love the unborn and themselves. We need to build up, not tear down, the general public. So I am talking to a young woman who has had an abortion. I show her the beauty of the unborn. I show her the miraculous complexity of early cell differentiation and the surprisingly complete looking 8-week-old gestational age unborn child pictured here. Then she looks at me and asks, “Is that what my child looked like?” “Yes,” I say warmly smiling back at her with my best “Mr. Sensitive pony tail man” aura. “So that was what my child looked like when I got the abortion?” Uh oh. Now here is the rub. As she connects her unborn child that she aborted with the beautiful images and poetic descriptions of the unborn life I am framing my argument around, do you think it makes the reality of what she has done easier? Do you think that she will not be offended once she realizes that I am saying she had her beautiful unborn child violently vacuumed from her uterus? Or cut into pieces and extracted? Or pulled limb from limb? Or poisoned and burned with saline?

I do not often use graphic images when talking. I actually have that picture of the 8-week old pre-born projected on a large screen. Then I explain why abortionists have to wait to abort the unborn life until it is old enough to reassemble the body parts and account for all of the pieces of the child to prevent the mother from getting sick from tissue that is not properly removed. People gasp and cry and turn away. I do not shy away from graphic images,though, because the truth is that abortion is ugly. It is very ugly. You can play nice for a while, but sooner or later it comes down to 3 questions:

If they are human beings with a natural right to life then the answer to number three is grotesque and horrifying. How do we not confront it? Mr. Adams, are the images untrue? Do they deceive those who see them in any way? If not, then it seems an odd concession to those who wish to protect the legal right of Americans to kill the unborn for elective reasons because it offends students. That would just be crazy.

HT: Stand to Reason
Posted by Jay Watts at 9:35 PM