Hold at all Costs [SK] 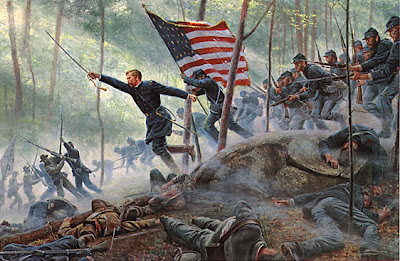 I love visiting Civil War battlefields. It's my way of connecting with heroic men who put their lives on the line for ideas that mattered.

Next time you're discouraged doing pro-life work and want to retreat, you may want to ponder the exploits of Lt. Colonel Joshua Chamberlain, who on this date in 1863 made military history on a small hill known as Little Round Top.

Briefly, Chamberlain's 20th Maine was ordered to hold its position on the far-side of Little Round Top and to do so "at all costs." This was no easy task: His regiment, 1,000 strong less than a year prior, was now down to just over 200 men. Yet hold he must, because if driven from his position, the Confederates might seize control of the hill, thus obtaining a possible platform for reigning cannon fire down on portions of the Union line.

Without delay, Chamberlain's men took up defensive positions and within minutes were under fierce attack from much larger Confederate forces from the 3rd, 4th, 15th, and 47th Alabama brigades, as well as from the 4th and 5th Texas ones.

Then the unthinkable happened. They ran out of ammunition.

Chamberlain knew he couldn't retreat, so in one of the most gutsy moves in military history, he ordered his men to attach bayonets and charge the on-coming enemy. Caught totally by surprise, the Confederates either fled or surrendered. Thus, Little Round Top was saved (not only by Chamberlain, but also by regiments from New York and Pennsylvania who held their positions as well) and though some historians question the strategic importance of that small hill (wrongly, I think), none can challenge the bravery of the men who fought defending it.

(See the inspiring re-enactment of Chamberlain's charge from the movie Gettysburg here.)

May those of us standing for unborn human life take a lesson from history and strengthen ourselves with a good dose of Chamberlain's courage. Lives depend on it.

PS--the picture of Chamberlain's charge above is by Mort Kunstler and it's framed on my office wall.
Posted by SK at 2:08 AM