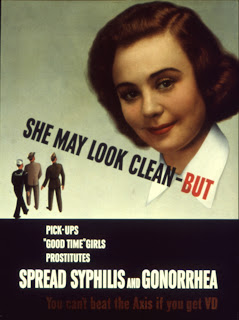 In thinking about the HPV vaccine, I wished to note the significant change in how we deal with STDs that have occurred in the last few years. In many ways, it reflects the continued cultural shift that have occurred in the area of human sexuality. Specifically, it reflects the shift from personal responsibility and public health to a radical individualism in regards to sexual activity.

STDs are not new, but the way we prevent them is very different. In the past, there where two strategies that were effective in stopping the spread of STDs. First, we understood that as a behavioral issue, personal responsibility to avoid dangerous sexual activity was most important. This message is clear via this poster from the WWII era. Contracting an STD was downright Unamerican!

At a public health level, we used a technique known as contact tracing. If someone was diagnosed with syphilis, they were required to inform their most frequent sexual partners. Often, public health departments helped in the reporting process. Those exposed to STDs could be examined and treated before an epidemic could occur. This strategy has been highly effective in treating other communicable diseases like tuberculosis. I still receive a TB test every year as a requirement for hospital privileges.

Over time, the STDs that we encountered have become more virulent and dangerous. Herpes cannot be treated, and little needs to be added in describing the HIV epidemic. Ironically, as the diseases we encounter became scarier, we allowed ideology to change the way we see and treat these diseases. Instead of educating in the way of self control and personal responsibility, we decided that limiting sexual activity was an impossible task. For that reason, we settled for "safe sex" techniques which limits but does not prevent infectious outbreaks. Instead of informing sexual partners of the risk they were taking, a thin layer of latex was thought to do the trick.

As surprising as that was, the change in the realm of public health was even more alarming. It was decided that an individual's rights to "private" sexual activity always trumped the public health risks. Instead of educating an HIV patient on contacting their sexual partners, this was now determined to be none of the doctor's business. In fact, in order to protect the privacy of one who is diagnosed with HIV, physicians were unable to discuss the diagnosis with other health professionals. We are to treat everyone as equally potentially infectious, whether it be an IV drug user or a five year old child. "Universal precautions" replaced the methods we use to identify and treat every other deadly infectious disease.

It doesn't matter that contact tracing could save many more lives than our current strategy. The individual's rights to do whatever they wish to with their genitals without judgment or exposure is more important to our culture than saving lives. I see no evidence that this is changing, and I believe it is difficult to underestimate the negative effect that it will continue to have on our culture.
Posted by Serge (Rich Poupard) at 10:22 AM