First, if they are simply claiming that the term partial birth abortion is not found in the current procedural terminology (CPT) manuals, they are correct. The CPT are the codes that physicians use to describe the procedures that they perform. Looking through our CPT manual, there is no listing for partial birth abortion.

Does this mean that such a procedure does not exist? Well, no. If that was the case, then facelifts, gall bladder removal, and heart bypass surgery also do not exist, for they are also not listed in the CPT manual. Physicians describe these procedures as rhytidectomy, cholecystectomy, and coronary artery bypass graft (frequently abbreviated as CABG pronounced like "cabbage"). Physicians frequently use more colloquial terms when describing procedures to aid in patient understanding.

It seems our opponents would like us to use only the "medical terminology" used by physicians, but certainly do not hold other procedures up to the same standards. I was reviewing a dictation on a surgery I performed, and the procedure stated "2-piece Maxillary Lefort I osteotomy with posterior impaction with a mandibular bi-sagittal split ramus advancement osteotomy for treatment of apertognathia, mandibular hypoplasia and maxillary transverse deficiency". I suppose I could use that language every time, but usually I simply state that I performed jaw surgery.

Is the term "partial birth abortion" accurate? Well, if someone claims that it is not, then please explain why. Here is some information regarding the procedure of intact dilation and extraction as well as visuals. Please explain how the term partial birth abortion is not accurate? Here is the picture of when death occurs in this procedure. Does it not appear that the child is partially born at the time death occurs? 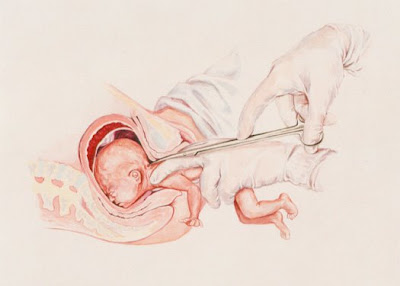 The accurate use of "non-medical" terms to describe procedures is an accepted way of talking about medical procedures to the general public. It would be nice of our opponents would accept the facts of what they are describing, as opposed to hiding behind technical language.

By the way, for those interested my surgery described upper and lower jaw surgery where I widened and moved the back of the upper jaw up, and advanced the lower jaw to correct an open bite, narrow upper jaw, and weak lower jaw. It is somewhat similar to this case here by Dr. Steven Tucker.
Posted by Serge (Rich Poupard) at 6:55 AM